David Larible comes from six generations of artists. His family is originally from a place called La Rible in France.There are family ties with many European circus families. His great grandfather was Pierre Larible, an acrobat and dancer and his grandfather was also a clown. Larible's father, Eugenio Larible, is the former trapeze artist and juggler, who still teaches today at the circus school of Verona. Larible's mother, Lucina Casartelli (1931-2003) was a child circus artist and so was Lucina's father.

In 1982, Larible married the (then active) Mexican-American trapeze artist America Olivera Jimenez. The couple have two children: daughter Shirley (1989) and son David Pierre (1997). The children want to be artists. Shirley will sometimes appear on Roncalli.

Larible grew up in Verona and in various circuses. His father Eugenio appeared as a juggler and together with his uncle Renzo on the trapeze. Besides his mother tongue Italian David Larible is fluent in French, Spanish, Portuguese, English and German.

In interviews, he likes to tell, he would have decided the age of eight, to be a clown. His father had not been very happy about it, he had wished that his son is a trapeze artist like him. But eventually he would agree and would have been the son equally funded as requested. 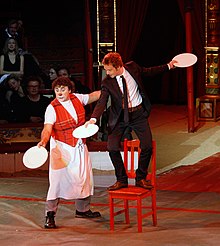 In his childhood, David Larible was taught acrobatics and juggling by his father Eugenio. In 1968, he began an apprenticeship with the Conservatory of Music in Verona. His first official appearance in the ring was in 1973 at the Circus Medrano. There, he performed with his family in a roller-skating number.

In the 1970s, followed by engagements in Switzerland, he was in the French Circus Circus Nock in Bouglione. As Laribles parents in the early 1980s Circus Krone are involved, it begs the then-director of Circus Frieda Sembach-Krone to step in for a clown. He exploited this opportunity and built the relatively small number still further.

Other engagements followed. After a three-year guest appearance at the Italian Circus Togni, Larible Cesar returns to Munich back to the Circus Krone, where he remained until 1989. During this period, he was a producer of ZDF, the television series Circus - animals, clowns and acrobats (presented by others Freddie Mercury). He was seen as part of the Circus of the Stars. In the 1980s, he began to incorporate involvement by the audience into his act. Still today, this remains one of his trademarks.

In 1989, Larible left Germany and started performing in England and Mexico. In 1991, he joined the biggest and most famous circus in the United States - Ringling Bros. and Barnum & Bailey Circus. From 1993 to 2005, he was under contract and quickly became the main attraction. The time in the United States was characterized by hard work and achievement. Larible says, "I would not miss a day, even if I was sick, I went on." On the other hand, he developed in those years, other trademarks, inventing new numbers and perfected his performance. Developed jointly with the Ring Master/owner Kenneth Feld Larible Barnum's Kaleidoscape, a new concept for the United States Circus.

Larible had a brief appearance in the film Ocean's Eleven in 2001.

In 2005, Larible returned to Europe. Since 2006 he has been involved with the German Circus Roncalli.

In 2014, Larible performed with the Swiss Circus Knie.

David Larible is known for his classic Auguste Clown technique. Larible has a wide repertoire as a dancer, singer, musician and juggler. He is inspired by Classical music, Opera and ballet. One of his specialities is direct interaction with the audience and involvement by spectators. His influences include Charlie Chaplin, Charlie Rivel and Grock. In his gestures and facial expressions, he reminds the audience of Chaplin, but he develops its own style with charisma and presence in the ring. He uses music composed by Chaplin in his performances. 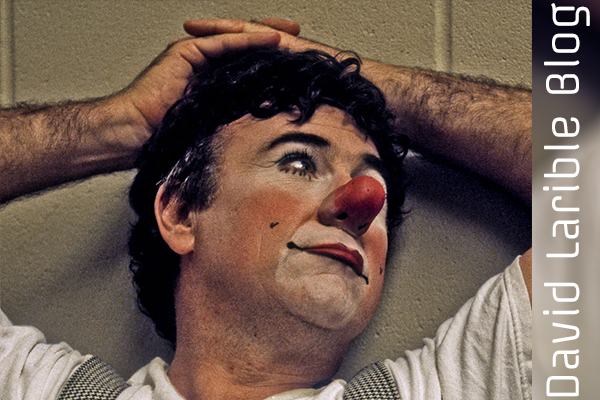